“A sound that owes much to the pervading styles of the early 90’s – spiralling acid-rock guitars over loose-limbed drumbeats and funk-infused basslines… (merging) scuzzy indie-rock with dance and dub, creating a debauched all-night party vibe… Singer and main songwriter Trevor Anderson has a way with words too… A heady, intoxicating set of tunes which reveal hidden depths with each listen.” 4 STARS Shindig!

“More well-done, intelligent, retro-touched folk rock power-pop…  The High Dials continue to evolve with each album, ever more epic and alive with the atmospheres of forever.” The Big Takeover

“The Montreal band takes the dreamiest, hippy-dippy music from the late ‘60s and adds a cool modern, urban flair… A delightful and clever blend of styles.” Irregular Dreams

“Pulls from 50 years of trippy music, from The Velvet Underground to Edwin Starr to The Jesus & Mary Chain and Primal Scream.” Brooklyn Vegan

“The poppier-end of psych-pop… damn is it ever cool. Emphasizes the use of killer beats and slick licks, while conjuring the trippier side of people like Beck, Joel Gion and Apples in Stereo. Come for the fried hallucinogenic pop-funk of “Fear of Heights,” stay for the burned-out chill of “Rays of Shade.” Burnt, danceable and filled with great, unexpected turns.” Record Crates United

“When The High Dials groove, they groove hard… listeners are lulled into a world of just-about-danceable delight… the album moves like a dream as it weaves together psychedelic power-pop, haunting melancholia, and gritty darkness.” Gray Owl Point

“A compelling listen… explodes like a kaleidescope”. Disc of the Week. Quick Before It Melts

With “dancier grooves, pumping post-punk basses, woozy psychedelic sonics, and even some soothing dream-folk. They’ll seduce you — and more importantly, you’ll still respect them in the morning.” The Toronto Sun

“Upon (a) rhythmic foundation, the High Dials layer synths and guitars to create an entirely new variety of electro pop that is extremely versatile and melodious.” 8/10 Exclaim

On their “brave fifth album (the band) have pulled off exactly what the High Dials needed to accomplish by gently redefining themselves while giving their core fans what they always come for.” 4 stars The Montreal Gazette 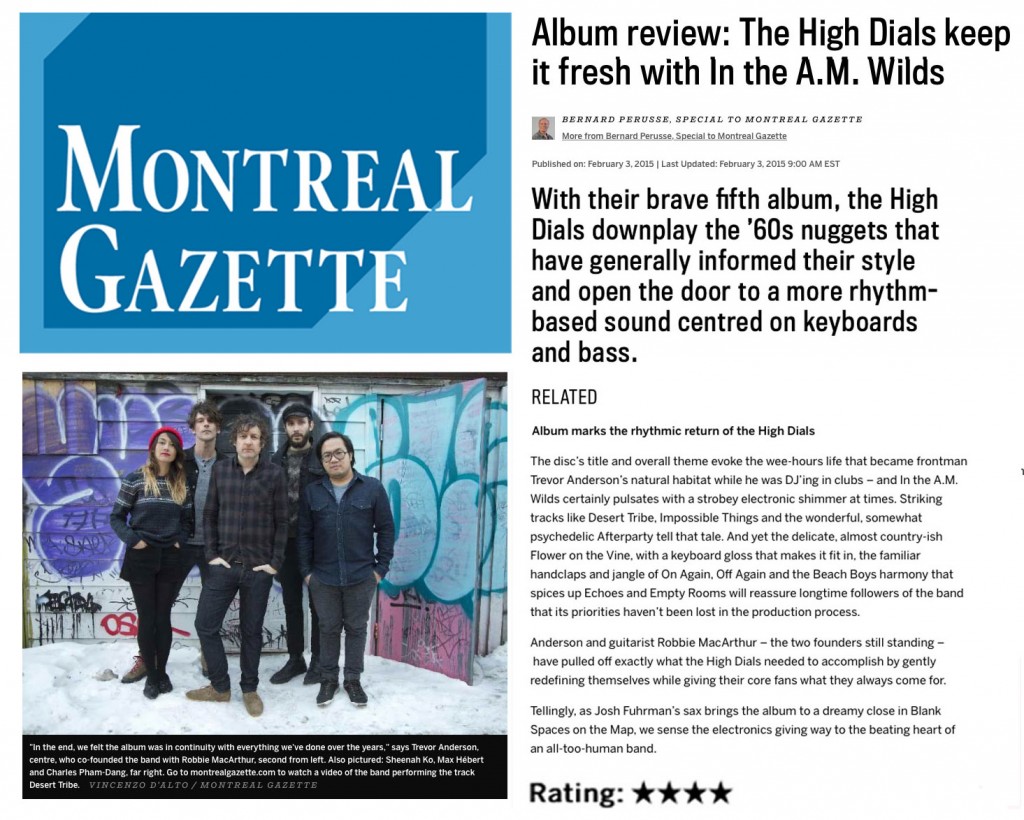 “A sound that bridges the softer edges of shoegaze and psych rock and melodic indie pop… folkier and more passionately delivered material comes in the latter half, adding earthiness and vitality.” NOW (Toronto)

“The High Dials sound like a brand new band… their sonic evolution is immediately evident. The grooves, the vocal treatment, the post-punk bass and the shoegaze guitars are arranged in a way that pushes forward while retaining a link to band’s rich past” Cult MTL

“Montreal’s High Dials confound expectations by ripping their technicolour facsimile to shreds and reassembling the pieces in an abstract collage of blues and greys. A bold step” Shindig! (UK) 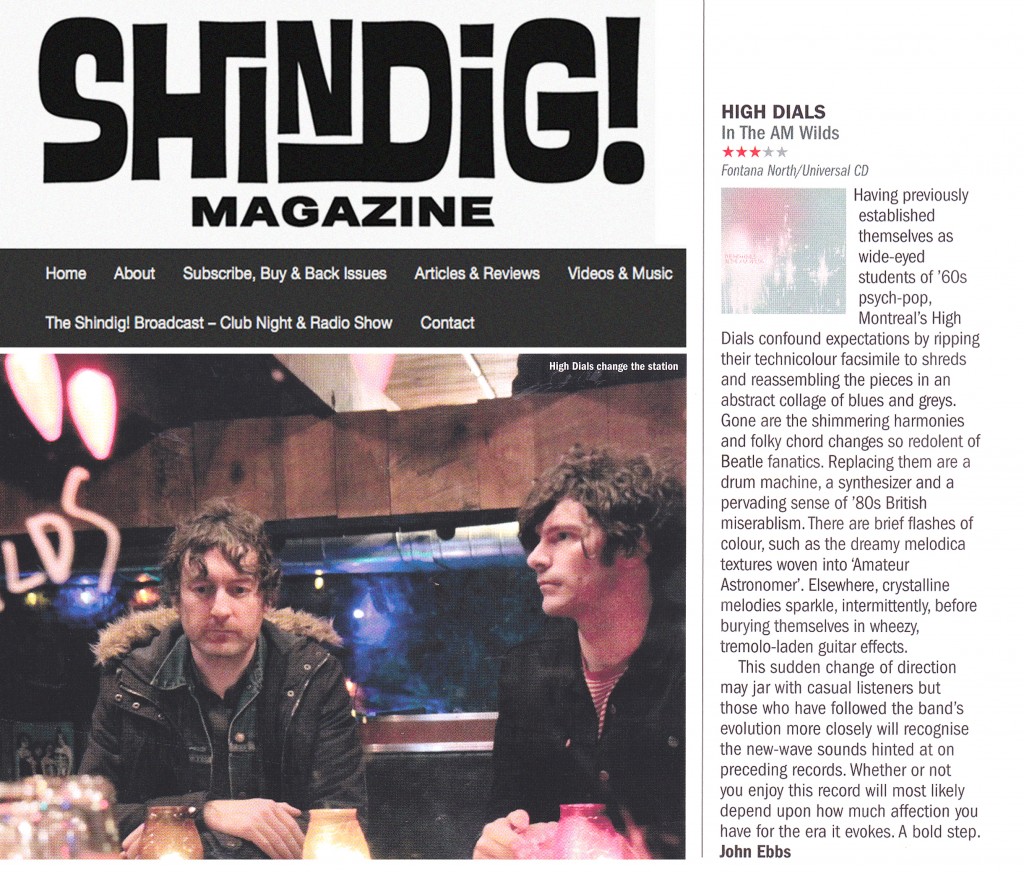 “Returning to the label that released their brilliant 2003 debut, this local quintet sounds refreshed and refined. On the intervening pair of LPs, they’ve flirted with shoegaze, country/folk and neo-Mad­chester styles while honing their pop chops. The result is a timeless, upbeat sound with an integral melancholy edge, a conflation of smart lyrics, classic songwriting, bright guitar work, tight rhythm and keys that often float alongside, adrift in the ether – 8/10 Montreal Mirror

“(A) dynamic fourth album. The band is still all about twinkling guitars and Trevor Anderson’s languorous croon. Humour lightens the load, from the album title to the driving opener Teenage Love Made Me Insane. “We get on, we get on, we get on / just like a house on fire,” Anderson whispers with sing-songy playfulness on Uruguay. Chinese Boxes has a countrified Daniel Lanois-meets-Elvis Costello vibe, while The Rich Die Too is all lush, dreamy expanse. And closing ballad Bedroom Shadows is an ethereal hymn that ends on a Twin Peaks-worthy ’50s note. It’s a trip, dude.” 4/5 The Montreal Gazette

“This is a long-player that practically demands you play it at ear-splintering volumes, just to revel in the hugeness of it all… An album that might be hailed in some quarters as an instant power-pop classic… A dazzling kaleidoscope of psychedelic flavoured confectionary… Meticulous, drug-addled, starburst songs that resonate long after this album leaves your CD player. Indeed, the songs here are not only anthems for doomed youth, they are, in the best sense of Brian Wilson, teenage symphonies to God.” 8/10 Pop Matters

“‘Reveals (a band) still finding ways to nudge their lysergic impulses into the ’70s and ’80s… The album’s aural contemporaries are seemingly the likes of R.E.M. , Echo & the Bunnymen, The Smiths, and the trippier end of the Paisley Underground crowd… The cool but inviting tone confirms the High Dials are finding new directions in which to point their guitars that give the music a shelf life well past the Summer of Love.” 4 stars, All Music Guide 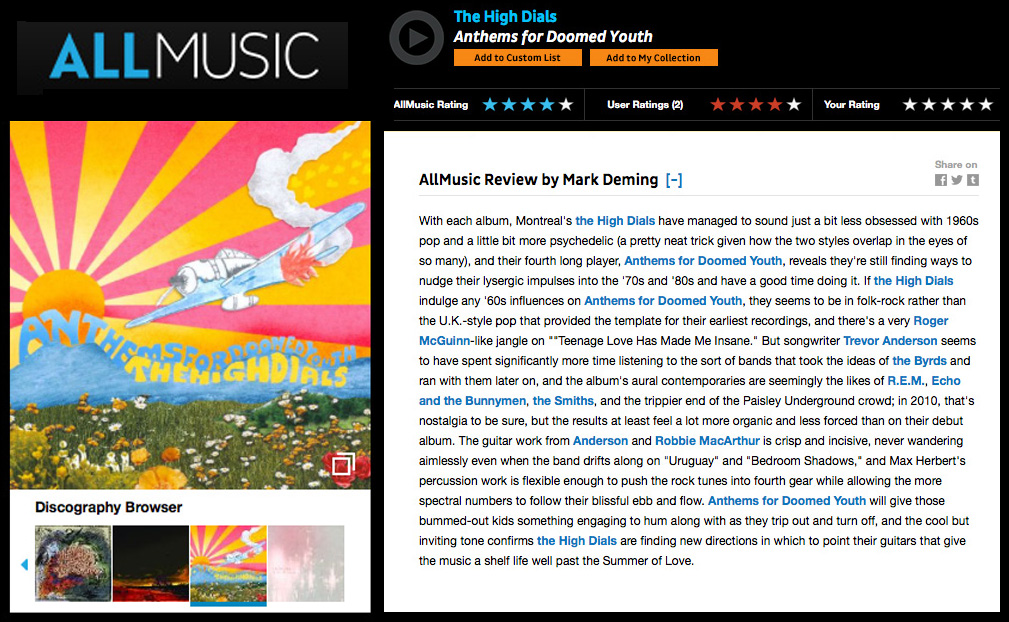 “Any of the tunes…would sound at home on Matador’s 1999 roster compilation… These days The High Dials are half Guided By Voices and half Helium. They’ve mostly ditched their penchant for psychedelia in favour of a jangly — albeit cloudy — ’60s pop… This feels like a comeback album” 4 stars, ChartAttack

“The High Dials have perfected their blend of ’60s pop hooks and swirling guitars, putting the fruits of their seven-year career on display… The quintet walk the fine line between playing up their pop strengths and embracing swirling sonics. The former always wins out, with vocal harmonies and chiming guitars bringing to mind Bandwagonesque-era Teenage Fanclub. This balancing act is maintained throughout, but nowhere does it work better than on opener Teenage Love Made Me Insane, which might be the song title of the year. What You Call Love is a Lie similarly shines, with its driving rhythm carrying the tale of one-night stands. Though all these elements may be classic tropes, the High Dials keep them fresh.” Exclaim

“(The songs are) passionate and rich with layers of instrumentation that recall some aspects of 1960s psychedelic pop with a modern spin. There isn’t any good reason why many of the band’s songs aren’t played on the radio and held dear in the hearts and minds of millions of listeners… These are five very talented musicians with a back catalog that could honestly keep an audience engaged all night long… Once you hear these musical gems both on album and live, you won’t be able to forget them or leave them behind wherever you might travel to, literally or metaphorically.” The Big Takeover

“Impeccable pop perfection… Simplicity is the key on the band’s fourth LP, with ’60s guitars chiming over the sweet rasp of Trevor Anderson’s effortless vocals. Listen after listen, Anthems for Doomed Youth is a truly lovable disc.” 4.5/5 Uptown Magazine (Winnipeg)

“Gorgeous, dazzling – these guys slay me again.” The Globe & Mail

“Arguably their best work to date… The High Dials have put their heart into this record; the lyrics are passionate and the music moving.” Soundproof Magazine 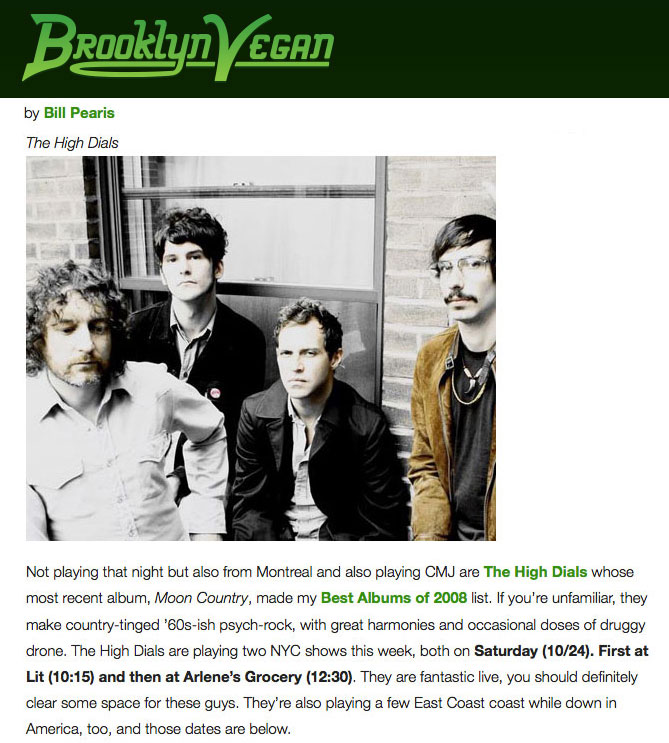 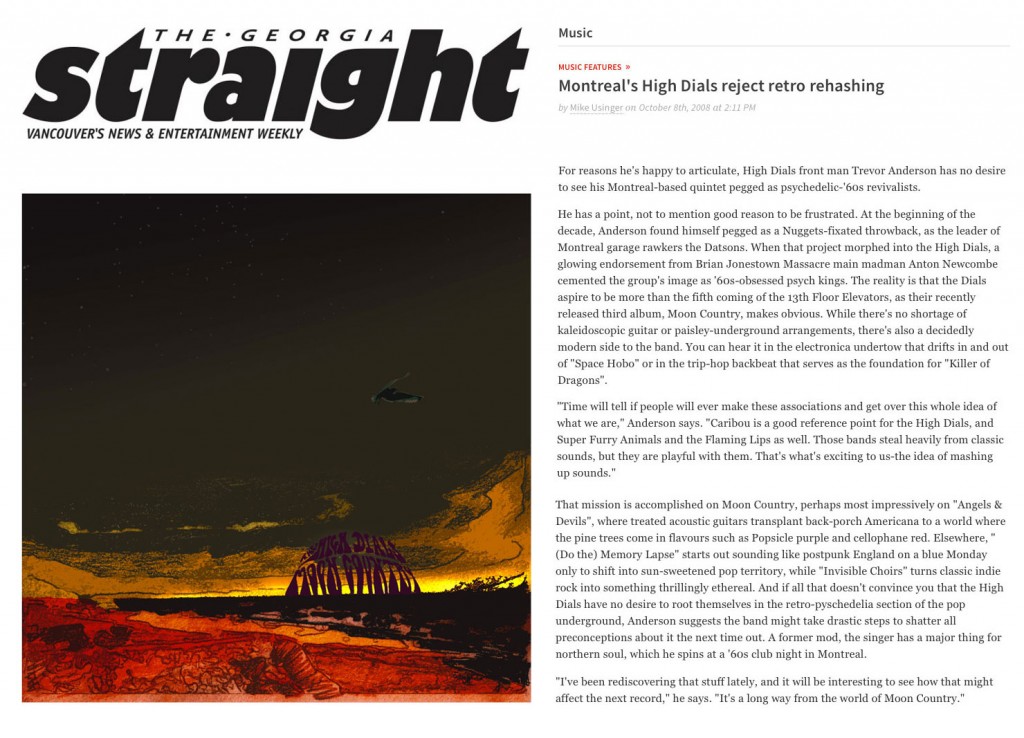 “(The High Dials) have made a latter-day psychedelic classic which sounds like “Going Blank Again”-era Ride jamming with the Zombies. Psych pop perfection.” 8/10 NME (UK) 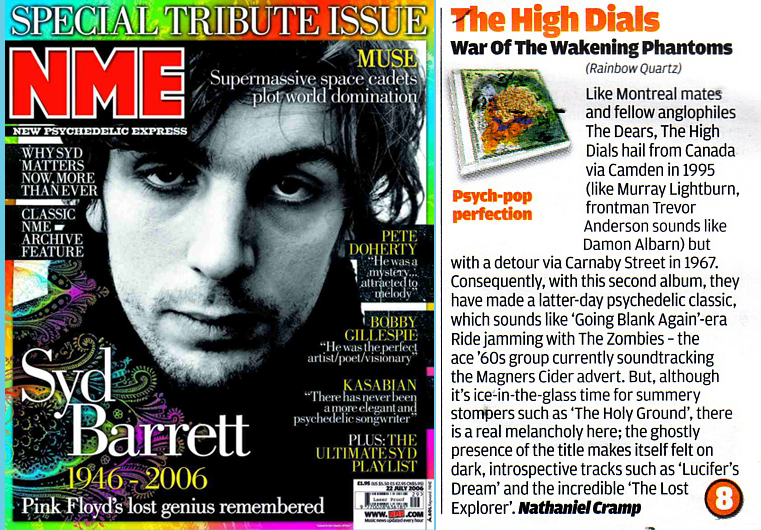 “Hailing from the Montreal scene that spawned The Dears and The Arcade Fire, the High Dials have more in common with the new wave of thoughtful guitar bands that includes the Shins and the Essex Green, with their precise guitar interplay underscoring songs about being adrift in the world or hopelessly in love. (The songs) breathe new life into pop’s tired romantic lexicon. Echoes of soft-rock legends Big Star, Love and the Moody Blues.” 4 stars  The Independent (UK)

“Canadian psychedelia that sounds like the Zombies waltzing with Doves among tall grass on a very sunny afternoon.”Pick of the day – The Guardian (UK)

“The High Dials occasionally resemble the Flamin’ Groovies or The Nazz, but are far more than mere slaves to British Invasion tradition. Infused with Topanga Canyon vibes and the spikier end of 80’s indie, their fizzing pop carries a melancholy strain that shares common ground with The Shins. Dazzling.” 4 stars – UNCUT

“At times their sunburst melodies sound arena-big, at times they sound like elegies written in country churchyards next to the Hacienda club”  Recommended – SPIN

“Close breathy harmonies, dreamy pop collages and intelligent wordplay…deceptively beautiful psychedelia and the smart, sardonic asides… If nothing else, this record is a compelling journey through heartbreak.”- Album of the Week, Rough Trade Website

“An immaculate, narcotic pop record, ebbing and flowing with cloudbreak vocals and jangled psychedelia, optimism and doom. The time of the High Dials has come, and none too soon.”- The Globe and Mail (Canada) 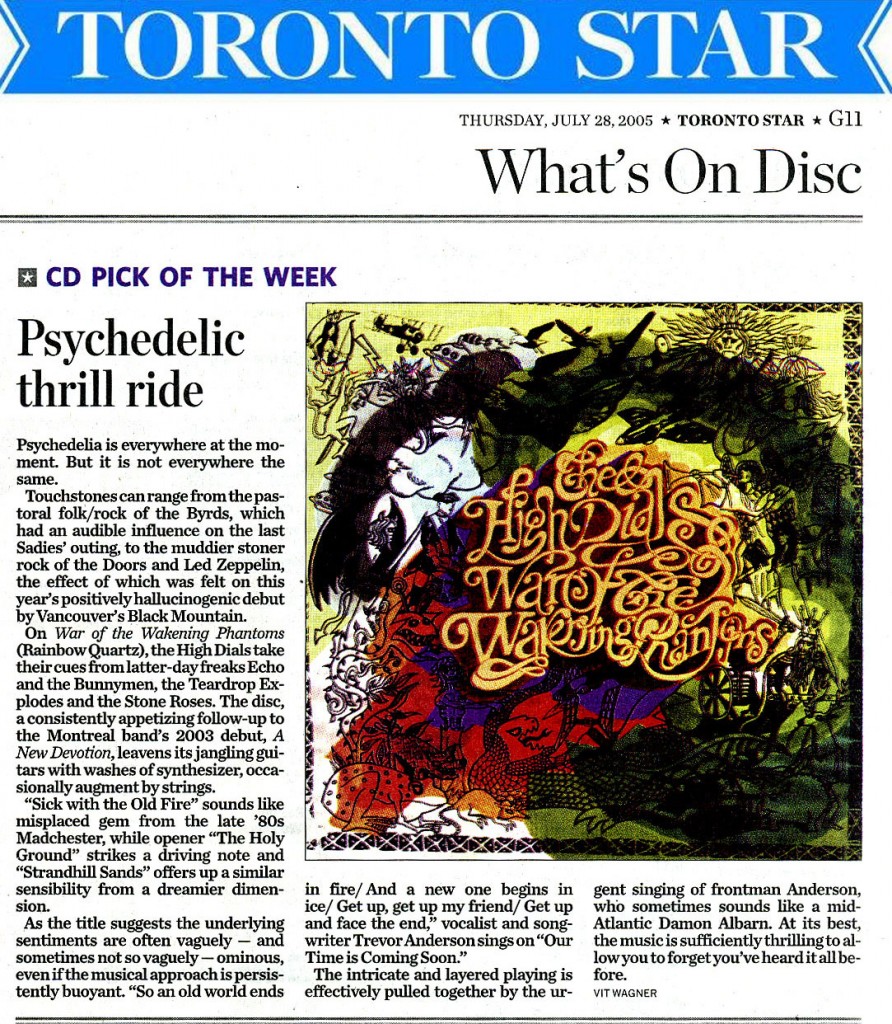 “This music is for right here, right now and all-time – classic rock in the greatest sense of the term.” 5 stars – Top ten albums of 2005 – Montreal Gazette

“If you’re not already in love, this album approximates its euphoric stupor…Hell, Montreal’s High Dials may even change your life”4 Stars – NOW Magazine (Toronto)

“There is something slightly epic about the High Dials. Reminiscent of the shoegazing/Madchester scene of the late 80’s-early 90’s, with an added elegance and sense of immediacy you get with bands like Arcade Fire or Polyphonic Spree.” Spill Magazine

“Everything that great rock and roll was meant to be: euphoric, pained, sweet, dark, dangerous, passionate, surprising and wholly addictive” 4 ½ Stars – Ottawa Citizen 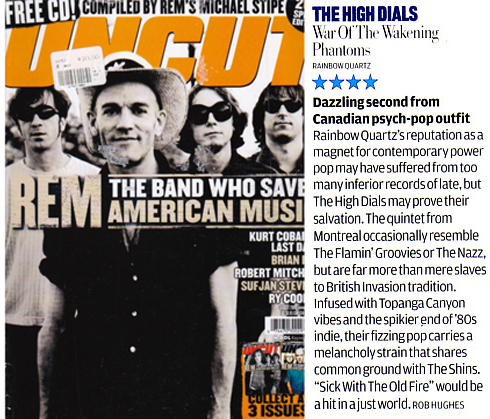