TREVOR: Inspired by old RnB ballads I’d been rediscovering while DJing a soul night in Montreal. I wanted to see if I could write an elemental simple song structure with a lot of power like those songs have. Fast-forward several months and I am playing a demo of this one for Andrew Loog Oldham high up in the clouds of Colombia. That was nerve-wracking even after some wine! But he was encouraging and had some ideas for the structure I would have loved to explore. He’s a film buff and dug the David Lynch undertone. Wonder how it would have turned out with him producing? Maybe one day we’ll get to try that out! 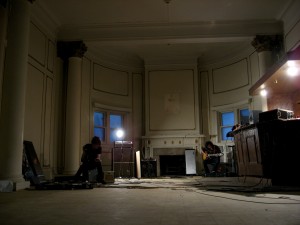 Robbie created a massive ambient sound for this song. It was epic and scary reverberating in the dark ballroom. The sound was so big the condenser mic in the room just couldn’t handle it, no matter how low we kept our recording level. That or the ghosts were messing with our heads. There was a crackling sound throughout which thankfully our good friend and sound expert Joseph Donovan was able to eliminate for us.

I wanted to do this song as a duet. In my dreams it was going to be with Chan Marshall. Never ran into her at a party though, I guess I don’t go to the right parties. We left it as just me but still wanted some female presence and so we invited the Ladies of the Canyon to help out. They came in on a scorching hot July day and knocked off a killer vocal arrangement in about 30 minutes. Man were we impressed!

ROBBIE: This was initially referred to as “the Ronettes song”. It really came together on the last day of recording with gorgeous backing vocals courtesy of Maia Davies and Anna Ruddick from Ladies of the Canyon and some beautiful string parts by Monica Gunter.

A technical note: My guitar sound on this one is 100% wet reverb – no dry signal – into a ’68 Fender Super Reverb (with the reverb on 10), into a ballroom with a 20 foot high ceiling. Mike Musmanno added even more reverb in the mix. There’s a similar “pure reverb” atmospheric guitar running through most of “What You Call Love is a Lie”.